This report is for a recent flight I took on Dragonair (now called Cathay Dragon) (KA) First Class on their Airbus A330-330 from Beijing to Hong Kong.
After fun-filled day exploring Tiananmen Square, The Forbidden City, and Mutianyu’s Great Wall section, it was time to head out. 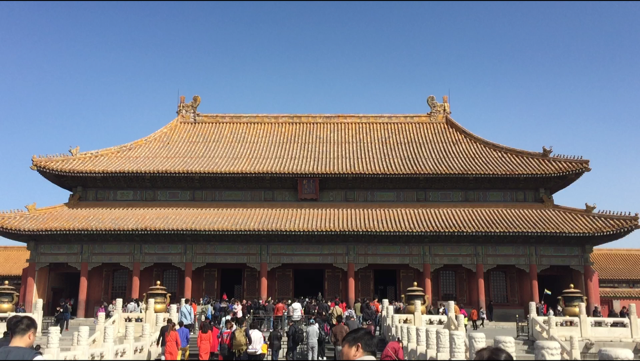 The tour company we hired dropped us off at Beijing Capital Airport Terminal 3 around 4:30 PM to catch our 7:30 PM flight. The guide mentioned that we needed to be at the airport 3 hours before departure to give us enough time to catch our flight…he was right and I’m glad we got to the airport early.

The terminal is huge and packed with people. We walked our way to the Cathay Pacific/Dragonair Counters and proceeded to the check-in desk via the First Class lane. Check-in took a few minutes, but was painless. Then we headed to the security line which was loooong!  There was a counter where you give your boarding pass and passport and they say whether or not you can proceed. We noticed that most foreign travelers were getting through fine, it was mostly Chinese Nationals that they were hassling for some odd reason. We got through OK. Then we were off to the usual X-Ray Machine and Metal Detector. I think Beijing has got to have the strictest X-Ray Machine operators. Most people’s luggages were being flagged and opened, including ours which added to the delay. Anything for security I guess…

After security, it was a quick stop at exit passport control.  Then it was a long trek to the satellite terminal. We took the long escalator down to the train station, then waited about 5 minutes for the train to arrive, and for security to check the empty train. The train ride to the satellite terminal took about 8 minutes. We then disembarked and made our way to the Cathay Pacific/Dragonair First and Business Class lounge. You have to take the elevators (or stairs) up to the mezzanine level, and the reception desk is right in front. The lounge is basically a long hall where from the entrance, you can turn right to get to the business center and TV room, or left to get to the dining area. We mostly stayed in the dining area. Some of the hot foods they were serving were dim sum, chicken congee (rice porridge), American Ginseng jujube fish soup (I know, don’t ask…), a fried noodle dish, a beef dish, and some white rice. They also had some pastries, and cup noodles available. They had your typical limited wine and booze selection, soft drinks, and an espresso machine. We tried some of their Chinese selection, but were a little disappointed with the taste. 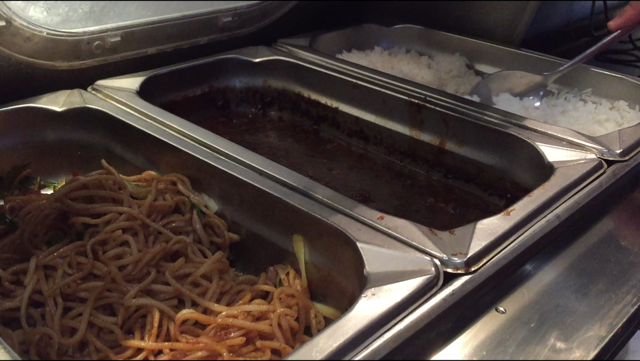 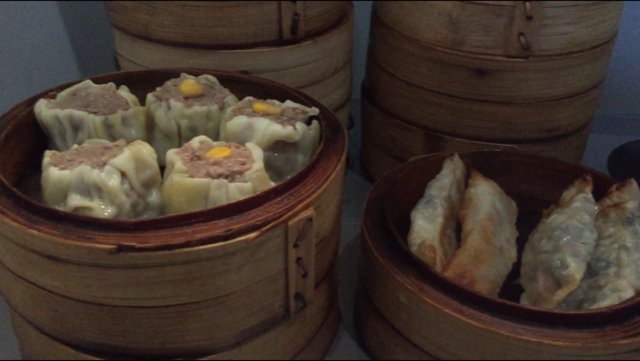 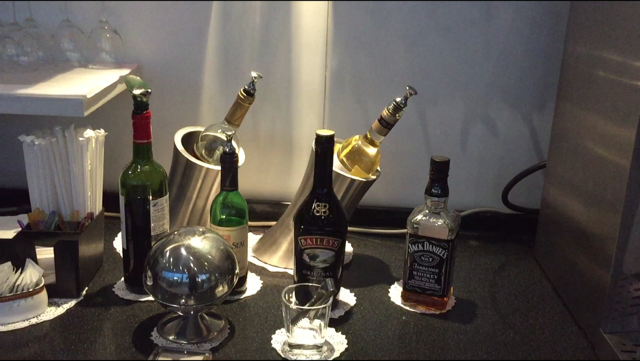 Soon boarding for flight KA903 was announced, and we headed to the gate area. There were a few people already lined up in the First and Business Class lane, but it didn’t take long for us to get through.

Once on board, we were greeted by a male flight attendant, and walked our way to our seat. I was seated in 2A, while my companion was in 1A. The seats are my favorite true lie-flat reverse herringbone seats that are comfortable, private, and functional. They don’t have the same bling factor as the Qatar Airways reverse herringbone seats, but they are just as comfortable and actually more private. 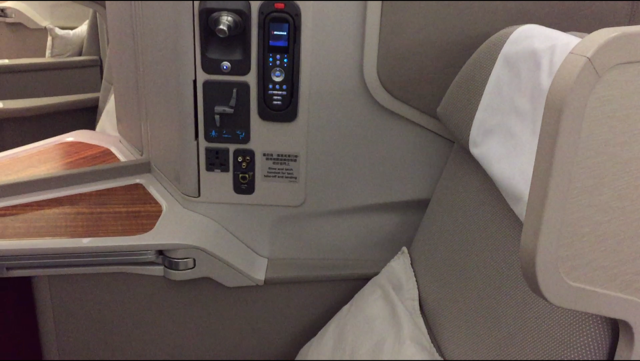 The IFE is the same as Cathay Pacific’s Studio CX system, but was re-branded as Studio KA. The system featured a good selection of movies, TV programs, and games. The moving map, though not one of the fancy map apps was functional and worked fine. 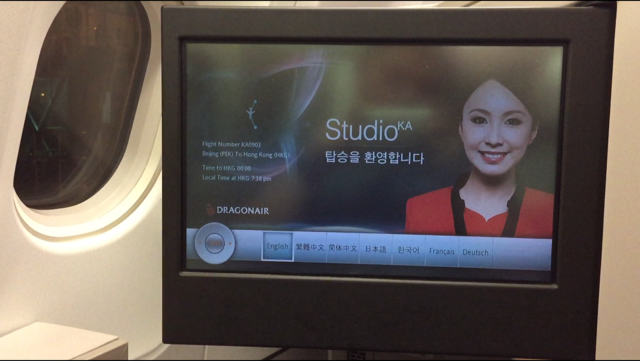 Within a few minutes, Macy, the purser came up and asked us what we wanted to drink. I opted for the champagne. Dragonair serves Taittinger Brut Millésimé 2008 which is about $90 a bottle. She soon came back with an empty flute and a salmon and zucchini amuse bouche. Then she returned with the wine bottle and proceeded to pour the champagne into the flute at my seat -a very nice touch. 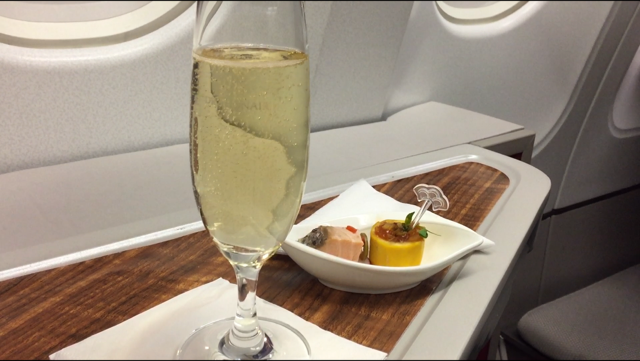 Initially only 2 out of the 8 First Class seats were occupied, but it seemed 6 passengers were upgraded at the gate as First Class was full before boarding was complete. Once all passengers were seated, we were off to Hong Kong. It was a short taxi to the runway and a powerful takeoff roll. The seatbelt sign was turned off about 10 minutes after takeoff.

Soon the crew sprung into action. Hot towels were distributed. Then Macy came back and took my drink and meal order. I just continued with the champagne and selected the Chinese meal. She came back with my drink as well as some almonds. After a few minutes, my table was set. Then again Macy was back with my appetizer which was cold Hainanese chicken and a beef and vegetable soup. It was very good! My main course was the pork belly in plum sauce, and bok choy and shrimp in pumpkin sauce – very tasty! For dessert, I had the Chilled mango sago cream with pomelo and a side of fresh fruits. I have to say, I was very impressed with the meal and the service.

My table was cleared after my meal and I visited the first class lavatory. It was your typical lavatory with Aesop amenities and a decorative fresh orchid.

Then it was back to my seat, where reclined to full flat mode and napped for about an hour. When I woke up, it was almost time to land and Macy came back and offered me some Godiva chocolates.

It was pitch black outside since we were landing in Hong Kong around 11:00 PM, and the runway we were using had little to no views of the city at all. Touchdown was smooth and uneventful. Taxi to the gate was quick and soon we were back in Hong Kong International Airport.

I was very pleasantly surprised at how good the service was for Dragonair’s First Class product. The service was definitely on par, if not better than some Cathay Pacific flights I’ve flown in the past. The seat, while not the great, wide, and amazing  Cathay Pacific First Class seat was perfect for the 3 hour flight to Hong Kong. As I mentioned above, it is actually the same reverse herringbone seat Cathay Pacific uses for their long haul flights (just different colors). The food was also exceptionally very good for such a short flight. There you have it: good service + hard product + food = a winning flight. The only minus was we were a few minutes delayed, but it wasn’t bad. I would give this a 9.5 out of 10. Please keep up the good work, Cathay Dragon!