After not being upgraded on the outbound flight, I was so relieved that both of our upgrades cleared a day before our return flight back to the US on flight AA26. From Hong Kong, we took a Cathay Pacific red-eye flight in Economy to Tokyo and spent a full day in my favorite city in the world.

After a day of sightseeing, shopping, and more importantly having ramen at my favorite ramen shop in Tokyo, we took the 8:00PM Airport Limousine Bus from the new Shinjuku Bus Terminal to Tokyo Haneda International Airport. The bus ride took about 35 minutes. Our flight was scheduled to depart at 1:00AM, which gave us plenty of time to enjoy the lounge. 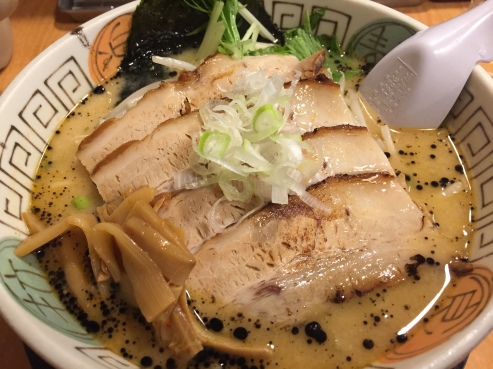 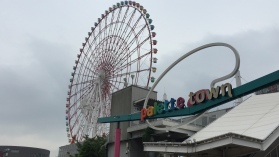 The Giant Gundam at Diver City

Upon arriving at Haneda, we found our way up to the departure level and went to the AA check-in counters. Priority check-in was quick and thanks to the Fast Track lane for premium passengers, we were air side in no time.

Right after immigration is a huge Duty Free store. We usually drop by here to get some delicious, and beautifully decorated boxed snacks for our family back home. If you don’t know what I’m talking about, please click here.

We picked up a few items, and then walked over to the JAL First Class Lounge which is my favorite lounge in all of Haneda Airport. We initially settled in their Dining area, and as always I had some of their amazing beef curry. There was also a chef taking orders for some grilled items. I ordered the grilled steak, which was tender and delicious.

After the meal, we went to the shower reception and asked for 2  shower rooms. All the showers were taken at the time, so they gave us a pager and we went to the relaxation room to use their amazing massage chairs.

A few minutes later, the shower attendant paged us that our shower rooms were ready. The shower rooms at the JAL lounge are on the small side, but still perfectly functional.

After a nice shower, we walked over to the Red Suite Area and enjoyed a glass of Laurent-Perrier at the champagne bar. We then started our long trek to the gate.

It took about 15 minutes for us to get to the gate from the lounge. A few minutes upon arriving at the gate, boarding started. At the door, we were greeted by a friendly Japanese flight attendant and pointed us left to the Business Class cabin. I was seated in 2A, and my companion in 2L, both of which are rear facing seats. Waiting at my seat was a Bose Noise Canceling Headphones, amenity kit, slippers, plastic wrapped duvet and pillow, and a bottle of Evian water.

I’ve already gone over the 787-8 business class seats before in a previous review of American’s Boeing 787-8 Business Class, so I won’t go over it again.

After settling in, the purser came by to offer pre-departure drinks and I chose the champagne. She also took meal orders, in which I opted for the Japanese meal.

After another 20 minutes, boarding was complete and the Captain came on the PA to announce our relatively quick flight time of 9 hours and 25 minutes to Los Angeles. We soon pushed back from the gate and the safety video started playing. The lights were dimmed, and the mood lighting was turned on. It was a quick taxi to the runway and take off was fairly smooth.

10 minutes after takeoff, the Captain turned off the seatbelt sign, and the flight attendants started preparing for the meal service.

One of the flight attendants came to set the table. Then soon, the purser gave out hot towels and returned with the drink cart to take our drink orders. I continued with a glass of champagne, which was served with warm nuts.

A few minutes later, my Japanese starter was served. The appetizer tray, like in my previous review consists of various small dishes served cold. It was delicious as expected.

Then the main tray arrived, which was the grilled flatfish with steamed vegetables served with rice, pickled vegetables, and miso soup. It was also very good, despite the presentation.

It was interesting to see gourmet chocolate was on the menu for dessert, when in reality it was just a small ball of Lindt chocolate.

After I was done, my table was promptly cleared and I visited the lavatory to freshen up and change into my pajamas before going to bed. The lav was on the small side and rather basic, but one Dreamliner feature that I very much appreciate is the touchless flush and faucet.

I soon returned to my seat and did a “self-turndown” of my bed in the sky. I slept for a good 4 hours.

I woke up mid-flight and decided to visit the walk-up snackbar. Nothing really looked appetizing, so I just took a bag of chips and some packaged cashews and went back to my seat to watch the moving map.

Like clockwork, about 1.5 hours before landing, the flight attendants started the pre-arrival meal service. The purser came by and offered a glass of smoothie, which was sweet and delicious. Then the meal cart rolled by and I chose the miso chicken and rice, which was served with fruits, and a warm croissant.

Soon enough we were descending into LAX. The landing was smooth and uneventful. It took about 10 minutes for us to get to the gate as there was a plane parked there when we arrived. We eventually parked at one of the gates in Terminal 4 and shortly deplaned. Given the lack of immigration and customs facilities in Terminal 4, we had to walk all the way to the Tom Bradley International Terminal (TBIT) via the new connector to go through immigration and customs inspection.

Thanks to Global Entry, we were through in no time. We then exited, took the escalators to the Departure Level, and walked over to Terminal 4 to catch our next flight.

All in all this was a very good flight. I love the timing on this flight, which give you the whole day to go around Tokyo and still arriving in the US, the day before you even left due to the time difference. The first meal service was rather abbreviated, but still very good. The seat/bed was comfortable and the service was efficient. I give this flight a good 8 out of 10. Thanks, AA!