After spending New Year’s Eve in Singapore, it was time to continue the journey home. We had a nice breakfast at the lounge at the Grand Hyatt Singapore and then took a stroll at the Marina Bay Sands. After all the walking , we got hungry and decided on Din Tai Fung. As always, the meal was delicious.

We checked out of our hotel a little before 4:00pm. Our flight was at 6:15pm. Knowing how quick and efficient it is to get through Changi Airport, we still had plenty of time to enjoy the lounge.

We hopped onto our Uber and arrived at Changi Airport Terminal 3, about 20 minutes later. There is a separate check-in area for Singapore Airlines First Class passengers, which is tucked away before you get to the terminal.

Upon arriving at the check-in lounge, we were greeted by a friendly check-in agent. Check-in was quick since we were the only ones checking-in at the time. First Class passengers also have their own dedicated immigration and security. We handed our passport to the friendly immigration officer, picked up a few Fox candies and we were through.
We made our way to the Silverkris Lounge up one floor from the terminal. Upon arrival, we were greeted by a lounge agent and walked over to the Private Room area. For those who don’t already know, the Private Room is reserved for Singapore Airlines Suites passengers. There is a separate lounge area for First Class and Business Class passengers. Since we just flew Suites the day before and we were in transit, they still gave us access.

One thing that I noticed about the Private Room is how quiet is was. It really is a beautiful space with high ceilings and warm touches. There’s the main lounge area, which is a long hall with plenty of seating. At the end of the hall is the business center, and phone closets with a chair and ottoman inside. Off to the side is a good size dining room with a nice buffet spread. To the back of the lounge are the washrooms and showers.

We initially sat by the window to get a good view of the tarmac. Upon sitting down we were approached by 2 friendly lounge attendants who handed us the wine and dining menus. My companion and I both opted for a glass of champagne. I asked for the Singapore Airlines signature satay, while my companion ordered the burger. We were asked if we wanted to dine in the dining area when the food is ready and we agreed. We were soon brought our champagne, and offered a few refills while waiting for our food.

Soon enough, both lounge attendants came back to tell us that our food was ready and our table was set. Waiting for us at the table was the satay and burger. My companion and I decided to split the dishes, so that we could try both. The satay, as expected was delicious. The burger was ok, but somewhat forgettable. We then checked out the buffet spread which offered mostly cold food items and desserts.

After our meal, I visited the restroom and shower area. The space was clean, well stocked and huge!
As we were nearing our departure time, we said good bye to the friendly lounge attendants and made our way to the gate. It was a bit of a walk, but we made it just as boarding started.

Security was a breeze and we were though in no time. Upon boarding we were greeted by a friendly female flight attendant who showed us our seats.

I was seated in 2F, while my companion was in 1F. The first class cabin on Singapore Airlines’ Boeing 777-300ER consists of 8 seats in a 1-2-1 configuration. This aircraft had the new refurbished first class seats. The seats are beautiful, with warm touches consistent with the Singapore Airlines aesthetic. They reminded me of SQ’s wide business class seats, but with slightly better legroom. There were no overhead bins in First Class. Instead, there is space in front of you on the floor where you stow your luggage.

Flight SQ2 is actually Singapore Airlines service to San Francisco, with a stop in Hong Kong. Most passengers onboard, it seemed were continuing on to SFO. 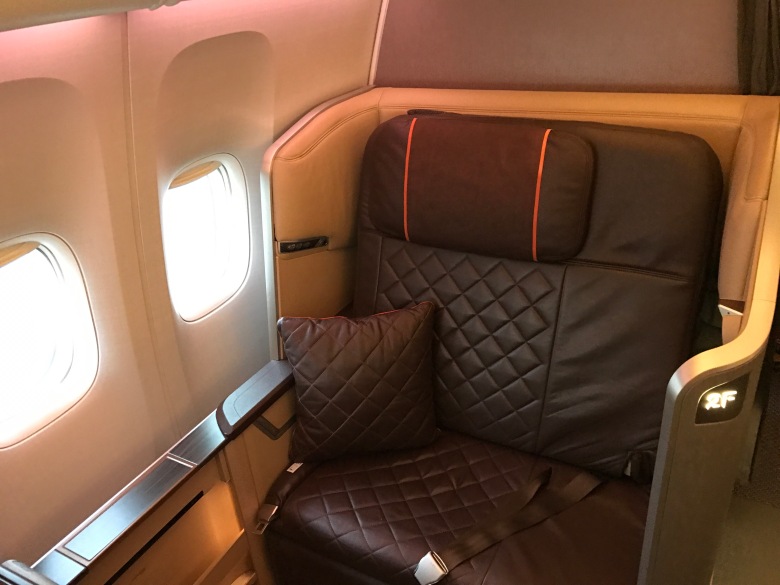 Upon settling in, we were offered a  pre-departure beverage, in which I asked for the Krug. The flight attendant soon came back with my order along with a hot towel. I really love how Singapore Airlines offer both Krug and Dom Perignon in First Class. Sadly, since this was a regional flight, no amenity kits, or pajamas were distributed to first class passengers terminating in Hong Kong. Instead, we were offered slippers and socks. Also waiting at our seats were the dining menu and Bose Noise Canceling Headphones.

Soon boarding was complete and the captain started his pre-flight announcements. Our flight time was 3 hours and 20 minutes.

After a few refills of Krug, we pushed back from the gate.  Our taxi to the runway took about 10 minutes. The Captain then asked the crew to take their seats, and we began our journey to Hong Kong. The climb was relatively smooth, with only a few chops in between.

A few minutes later, the seatbelt sign was turned off, and the meal service began. The flight attendant came back with another hot towel and asked what I wanted to drink. I said that I would just continue on with the Krug. She soon came back with my order along with some warm nuts.

While waiting for my meal, I decided to browse Singapore Airlines’ Krisworld Entertainment System. I found the interface very intuitive and offered a decent amount of movies, TV programs, audio selections, and games. Not to mention I really like the moving map app. I decided to watch the movie Jack Reacher.

Before I knew it, my table was set and the appetizer and soup tray was served. I’m not much of a seafood person, but the appetizer was delicious. The pork stomach soup tasted a little weird, but it was good nonetheless.

The next course was the main entrée tray, it was Char Kway Teow with side dishes of roast duck, prawns, and gai lan. This was possibly one of the best main entrées I’ve ever eaten on a plane. 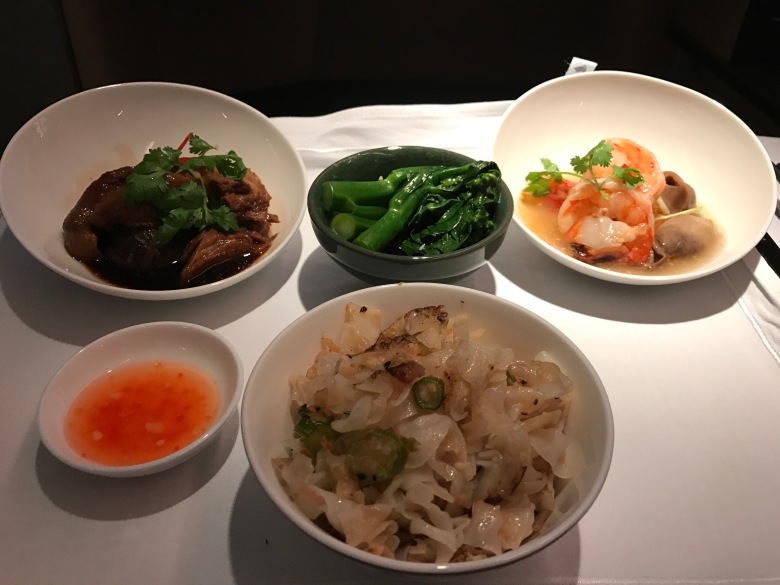 For dessert, I ordered the cake and ice cream, which was delicious! 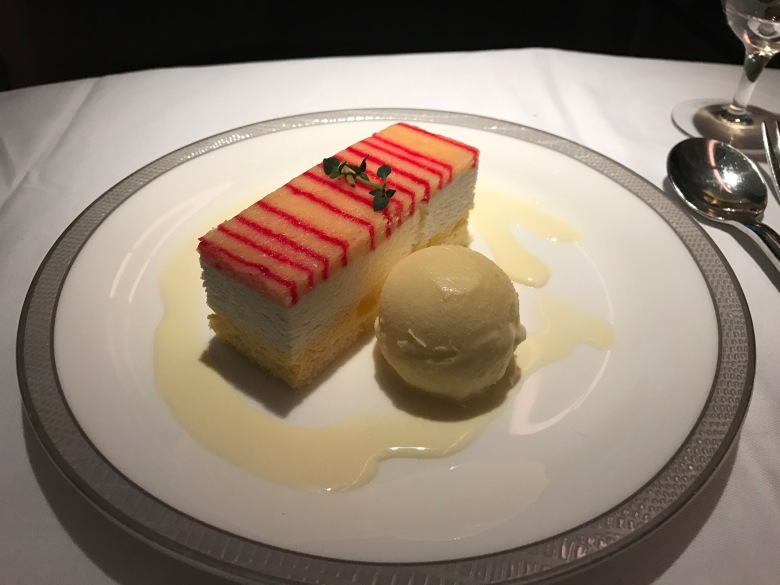 After dessert, I ordered a cup or Jamaican Blue Mountain coffee, which was exquisite. It was served with some chocolate pralines.

I then visited the first class lavatory, which was clean and well stocked with amenities.

At this point, we were only about 90 minutes outside of Hong Kong, so I decided to recline my seat and just watch the movie. I know of some people who asked for turndown service on this flight, and I was certainly tempted. However, I decided not to since we were so close to landing. You’ll just have to wait for the next time we fly Singapore Airlines First Class… 😉

Soon the captain announced our initial descent into Hong Kong and the flight attendants came over to thank us for flying Singapore Airlines.
The descent was a little bumpy, but we had an uneventful landing. Taxi to the gate was a short 5 minutes, and  we were the first ones off the plane.

Singapore Airlines offers a solid product and in terms of hard product service. Considering this was a regional flight, the catering and service were both top notch. Add that to the amazing Silverkris lounge in Singapore, and you have a winning combination. I would give this flight a 9.5 out of 10.