This was a very exciting flight for us, as it was our first time flying Qantas and we were flying one of their retrofitted Airbus A330-300 with the new business class Seats.

We arrived at Singapore’s Changi Airport Terminal 1 about 3 hours before departure. I personally think Changi Airport is the best airport in the world, and I loved it even more that they were all pokémon-themed decked out for the Holidays. Qantas Business Class passengers can use the Premier check-in facility right behind the regular check-in counters. The premier check-in area offers  a more private check-in experience with seats and a respite from all the crowd. An agent scanned our passports and allowed us into the lounge. We took our seat and a friendly check-in agent approached us, took our passports and printed us our boarding passes. The lounge has its own security checkpoint to get airside.

After immigration, we made our way to the Qantas Singapore Lounge. The lounge is huge, which makes sense considering Qantas has several flights out of Singapore. There were plenty of seating, a full bar, and a large dining room. There was a pretty extensive buffet spread and a made to order counter serving beef baos, and several other hot dishes. 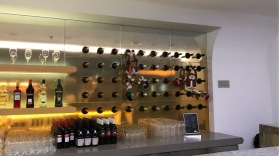 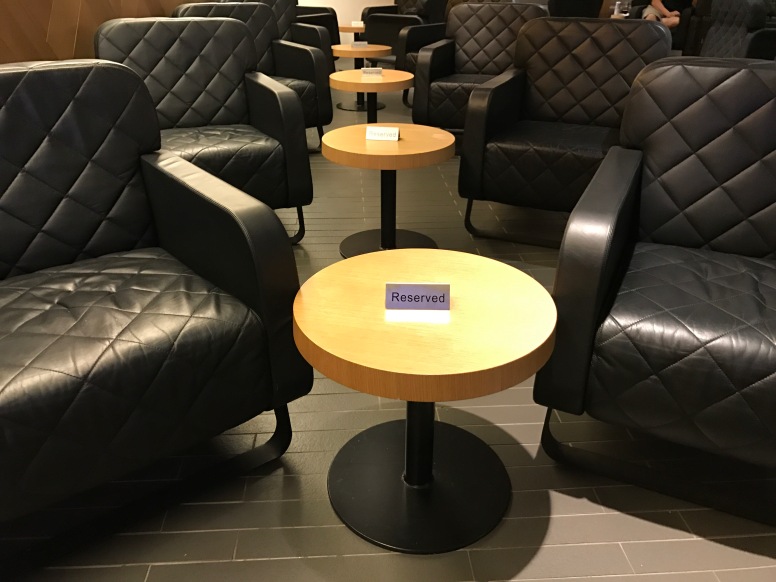 About an hour before departure, we started the rather long walk to the gate. As with most flights out of Changi Airport, security screening (X-Ray and Metal detector) is actually done at the gate. It didn’t take too long until we were through. There was another seating area by the gate where we waited until they called passengers to board.

Business Class passengers had Priority boarding and upon reaching the plane door, a warm Australian flight attendant greeted us and pointed us to our seats. The new business class cabin on Qantas’ Airbus A330 is beautiful! All seats are front facing, in a 1-2-1 staggered configuration. I was seated in 3K and my companion was in 2K. The “suite” felt very private and cozy, yet not claustrophobic. Due to the privacy shields, you really have to lean forward to see your neighbor across the aisle. This is very good for solo travelers, but not so much for people traveling together. 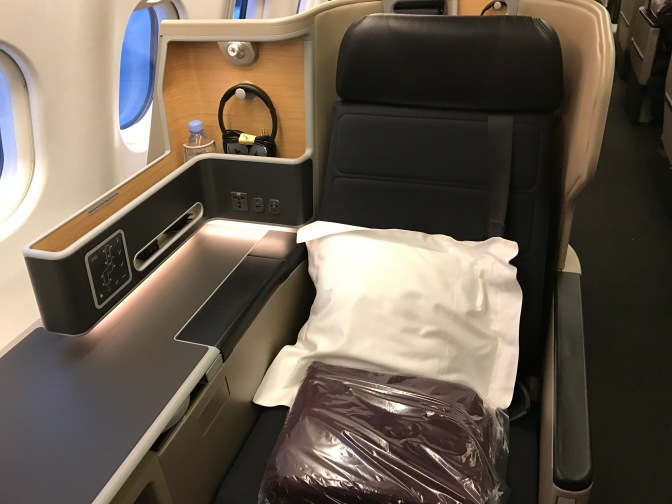 Upon settling into our seats, another flight attendant came over to offer us some pre-departure drinks. I opted for a glass of champagne. We were also given a Jack Spade amenity kit, and pajamas. 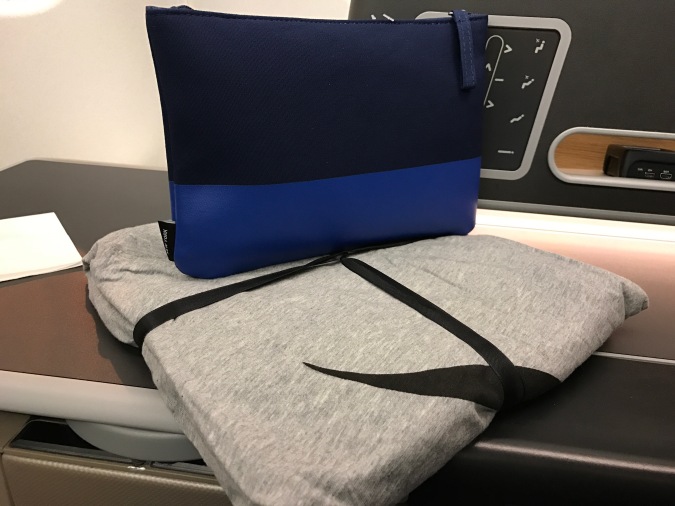 Since this was a red-eye flight, the flight attendant also offered to put on the mattress pad on the seat to maximize sleep after the meal service.

We had a slight delay, but we soon pushed back from the gate. The Qantas safety video started playing, and the taxi took a good 10 minutes since there were lots of flights both departing and arriving at that time. We soon arrived at the  end of the runway and had a long takeoff roll. The ascent was smooth and about 5 minutes later, the captain switched off the seatbelt sign. The flight attendants started their service. Drink service came first and I opted for another round of champagne and some still water.

The flight attendants soon set the table for the meal.  For the main course, I ordered the beef rendang and rice from their supper menu and it was delicious. 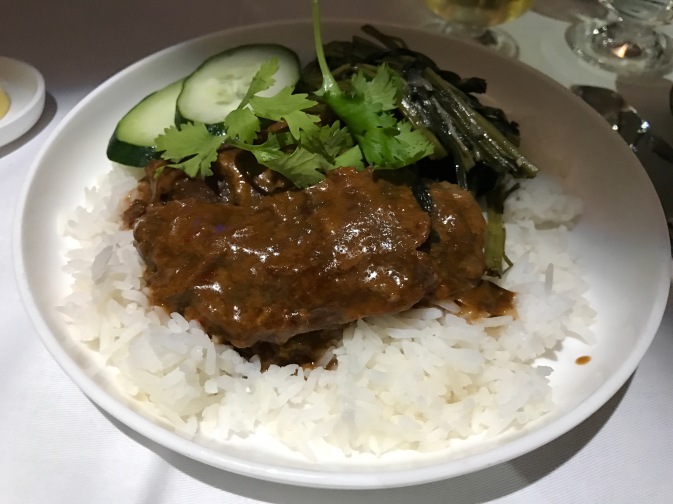 Then, I had the ice cream and some baileys on the rocks to finish off the meal. 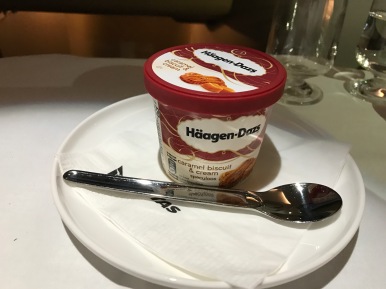 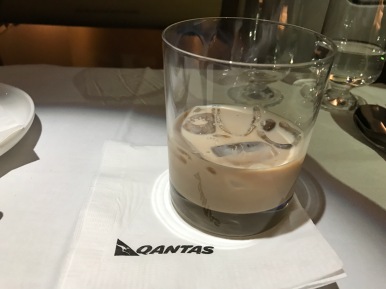 I visited the lavatory after the meal service to change into my pajamas. The lavatory was rather old and small, but that didn’t bother me too much. I do have to say that the Qantas pajamas are among the comfiest pair I’ve worn in flight.

I went back to my seat and converted it to a flatbed. The mattress pad and duvet were among the most comfortable I’ve had on a plane and I slept for about 3.5 hours! 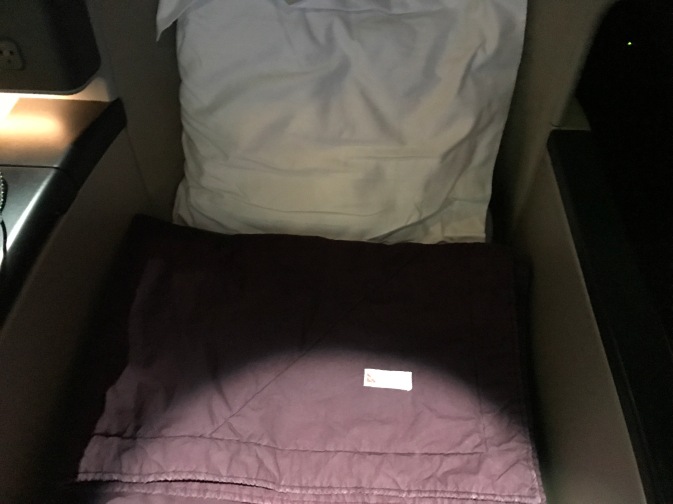 I woke up about 90 minutes before landing and was offered some breakfast. I ordered some fresh fruits and müesli, along with some coffee and smoothie.

Soon, I changed out of my pajamas right before our initial descent into Melbourne. The descent and landing were smooth and we got a really nice view of the sunrise as we landed into Melbourne. We taxied for a few minutes and got to our gate in no time. We said farewell to the crew and made our way to immigration and customs. Entry formalities were quick and we were soon in our über to the city.

We were pleasantly surprised at how warm and friendly the Qantas business class experience was. Meal service was very good and done without trays which was a nice touch. The seat and bed were very comfortable and I really like how private the suites are. I also liked the Jack Spade amenity kit and pajamas. The only thing I didn’t like was the old and dingy lavatory, but other than that this was a perfect flight. I give this one a 9 out of 10.