LATAM’s (previously LAN before the company merged with TAM) operates a 5th freedom flight from Sydney to Auckland, with continuing service to Santiago de Chile. We’ve flown LAN numerous times in the past to South America and were mostly satisfied with their product and service, so we decided to fly them again on this route.

Once we got to the check-in counter, we were promptly given our boarding passes and we were told that boarding was just about to start. The agent was apologetic that since we were arrived late, we would no longer have time to visit the Qantas Lounge. 😦 We were also given fast track passes to security and immigration. Thankfully, the line was short at security and exit immigration uses an automated gate for US Citizens. We were airside in less than 5 minutes.

I’ve mentioned in my previous post that we’ve always had interesting luck when it comes to gate assignments and this one was no different. As luck would have it, the gate for our flight was at the very end of the concourse! Thank goodness for moving walkways which made our hike to the gate a little more bearable.

Boarding was well under way when we got to the gate. Business Class passengers have priority boarding, so we didn’t have to queue with the big crowd. We were greeted at the plane door by a male flight attendant and were directed to turn left into the business class cabin.

We’ve flown on the 787 a few times already, but this was our first time, being inside a 787-9, so we were excited to see what it was like. There are 30 “Premium Business Class” flat bed seats on LATAM’s Boeing 787-9 Dreamliner. All seats are front facing and are setup in a 2-2-2 configuration. This is ideal when traveling with a companion, but this also means window seat passengers do not have direct aisle access. The cabin felt bright and spacious thanks to the Dreamliner’s high ceilings and oversized windows. I really liked the white, gray, and red color combo as well, for some reason. 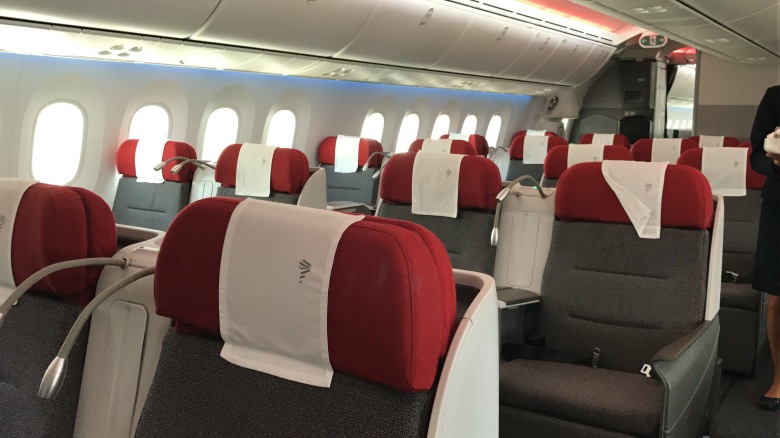 We were seated in seats 1A and 1C, both of which are bulkhead seats on the port side of the aircraft. Upon arriving at our seats, we were welcomed by the purser who greeted us in Spanish. After stowing our luggage, we then decided to check out the various features of the seat. Waiting at our seats were (non-Bose) noise canceling headphones. There is an adjustable gooseneck reading light in between the seats. One of the arm rest pops up to become a privacy divider when the seat is in bed mode. There were also a USB and AC power outlet on the center console. The bottom of ottoman, which turns into the foot rest when the seat is in bed mode can be used as a shoe or a small bag storage as well. There were also a few cubby holes around the seat which can be used for storage. The large tray table can be found on the center console and is easily deployed. 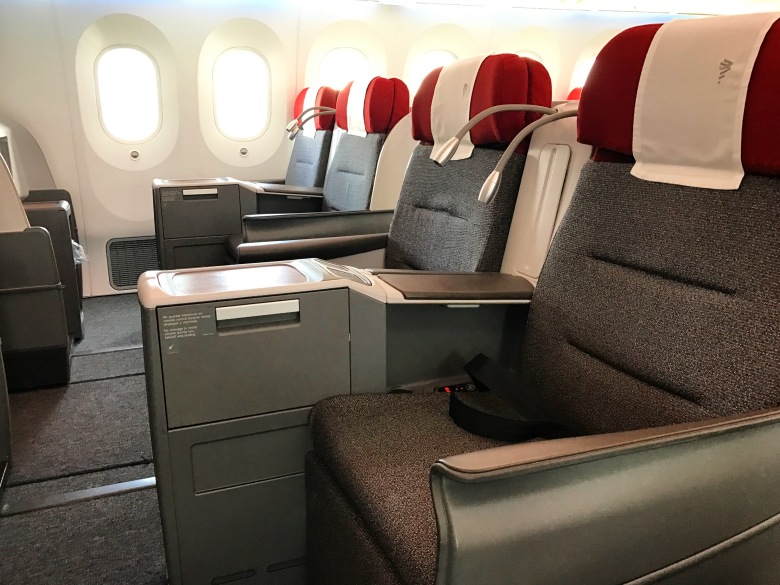 Upon settling in, Tomas the flight attendant working our aisle offered us a pre-departure beverage. I opted for water, and my companion ordered a glass of orange juice. The purser soon came back to hand out the menus. She greeted us both by name, and asked if we spoke Spanish. “Él, no solo inglés. (He does not, only English)”, I responded. Now, my companion and I are both Filipinos, but he always gets mistaken as Latino, and he also has a Spanish last name. I, on the other hand always get mistaken as a Chinese national (I’m part Chinese, but don’t speak any Chinese dialects), Thai, or Vietnamese. Needless to say, the purser looked very puzzled why an Asian looking guy was speaking Spanish, while the Latino looking one did not.

I checked out the in-flight entertainment and it offered a decent amount of movies, TV programs, and audio content, but instead I just decided to stick to the moving map. Soon, boarding was complete and the plane door was closed. The captain made his announcement on the PA and mentioned our flight time of 2 hours and 30 minutes to Auckland. We then pushed back from the gate and the safety video started playing. Taxi to the runway took about 10 minutes, after which we had a smooth takeoff.

The captain turned off the seatbelt sign about 5 minutes into the flight, then the crew started preparing for the meal service. Soon, Tomas came by with the beverage cart and asked us what we wanted to drink. I ordered a glass of champagne, while my companion ordered the same, as well as a diet coke. 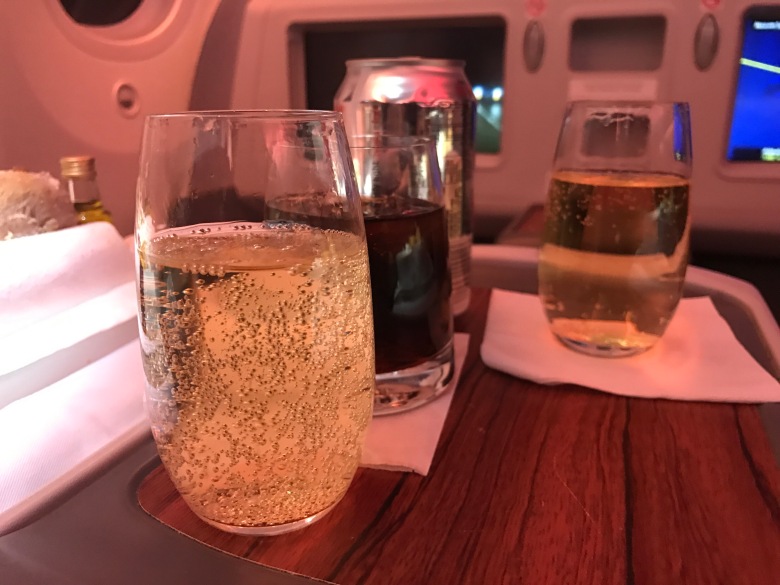 A few minutes later, the food cart rolled by. We had a choice of pasta or roast beef sandwich, and we opted for the latter. The meal was served on a tray along with a salad, and a coconut flan dessert. The salad and dessert were decent, though forgettable. The sandwich, however was very dry. The bread was so hard, it was almost inedible. 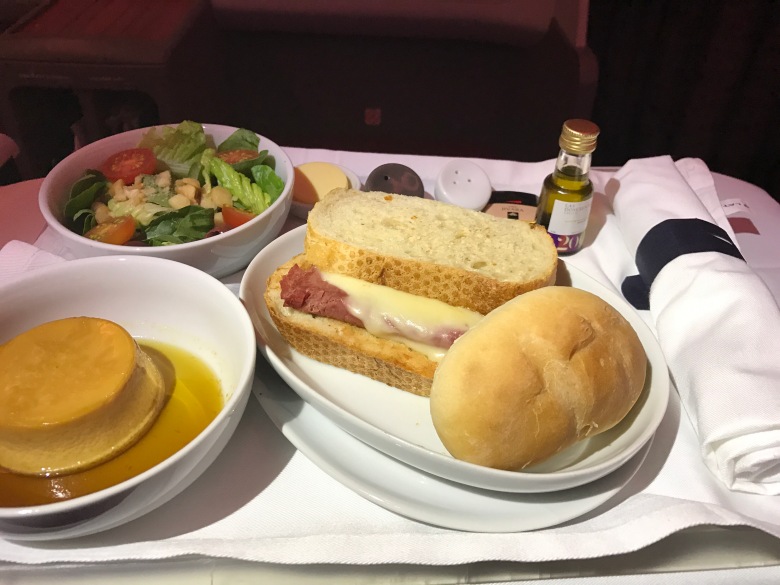 After the meal, our trays were promptly cleared by the crew. I then took the opportunity to visit the lavatory. The business class lavatory was fairly typical for a Dreamliner. It was on the smaller side, but it was clean, and well stocked with amenities.

After I freshened up, I went back to my seat, dimmed the window and reclined it into a full flat bed. It was very comfortable, and was able to get about an hour of sleep. 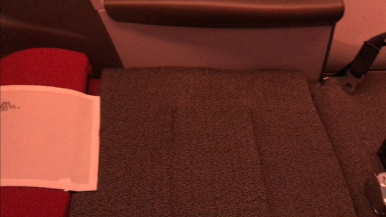 Soon enough, the captain came on the PA and announced our descent into Auckland. A video of the New Zealand entry procedures started playing, which emphasized a strict policy in declaring all food items.

The crew came by and collected any last minute service items. Our descent and landing were both smooth and uneventful. The crew made an announcement that all passengers needed to disembark whether or not they were continuing on to Santiago. We taxied to the gate for a few minutes, and soon bid farewell to the crew.

We walked over to passport control, which uses eGates for Passport holders of certain countries. Thankfully, the US was one of those countries and we were through in no time. We were questioned at Customs about the food items we were bringing in, but all we had were chocolates so that wasn’t an issue. Before we knew it, we were landside and on our Uber to our hotel within a few minutes.

Overall I have to say LAN offers a really good Business Class product on this route. They operate a brand new 787-9 which is awesome, especially for us avgeeks. The business class seats are wide and very comfortable for sitting and lounging. It also converts into a flat bed which is great considering this flight was just over 2 hours! The service was also very good, though admittedly, not quite to the level of Asian carriers…but still very good. The only thing I thought was lacking was the food selection and quality. The main entrée was pretty bad, but still not bad for a short flight. I imagine this to be problematic for long hauls though. I hope the continuing passengers to Santiago got a better meal in-flight, than the one they gave us. Other than that, I give this flight a very good 8 out of 10.