We were very excited to finally fly Qatar Airways’ longest route at the time, Doha to Los Angeles (soon to be DOH-AKL starting early February) at 8,306 miles and clocking in just a little shy of 16 hours.

We arrived at Doha’s Hamad International Airport around 11:00PM from Johannesburg the night before, for a long layover in Doha. We decided to just stay at the Al Mourjan lounge for the night. Thankfully, we were able to take a hot shower, and were given a quiet room to stay the night. 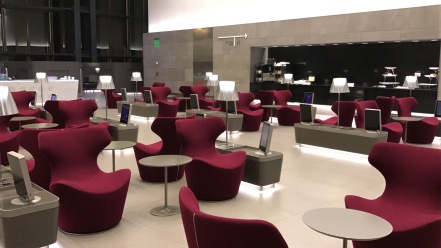 We got up early and had a nice snack at “the deli” area of the lounge. 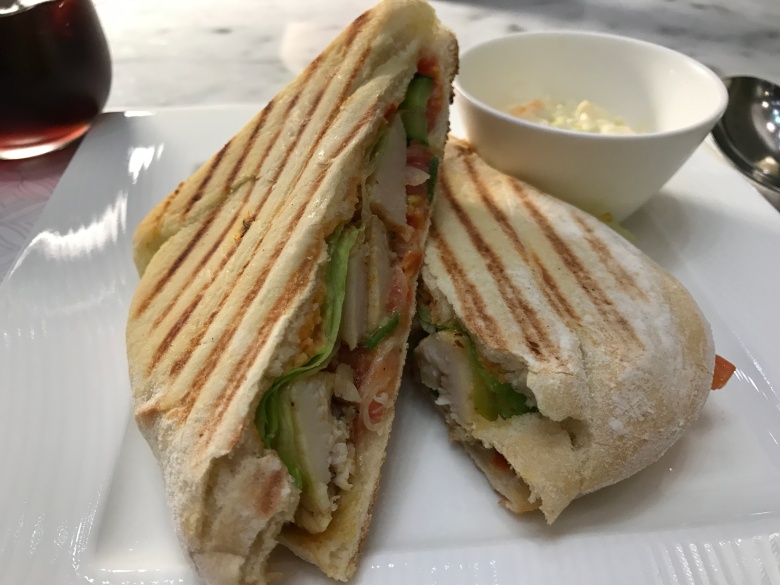 Before we knew it, it was was time to board our 16 hour flight to Los Angeles and as luck would have it, the gate was all the way at the very end of the long concourse. Thank god for the over head tram. It was our first time taking it, and it saved us a lot of walking. Upon arriving at the gate, there was additional security screening since the flight was US bound.

Security was a breeze, and a friendly agent scanned our boarding passes. We had to wait another 10 minutes in the boarding area before boarding commenced. First they boarded passengers traveling with young children and those with disabilities. Then they called business class passengers. We were greeted at the door by Puneet, the in-flight service manager and were shown to our seat by one other flight attendant.

We were seated in 3J and 3K on the starboard side of the aircraft. The business class seats on Qatar’s 777-200LR are the previous generation seats. All are lie-flat, and front facing at a 2-2-2 configuration. This means not all seats have direct aisle access. Though the seats are great if you are traveling with someone, as you can still have a conversation with your companion, if you’re seated together. The seat features a sliding drink coaster, revealing a hidden storage below, which they normally use to store bottled water. The IFE remote is also hidden in the arm rest on the center console. The folding tray table slides out from the center console, as well. There is a small storage side pocket to store glasses and small items, which also houses the USB power outlet and headphone jack. The seat controls with massage function can be found in one of the armrests. A small privacy divider can be pulled out in between the seats, if you’re not feeling chatty with your neighbor. You’ll also find an adjustable gooseneck reading lamps between the seats. The AC Power outlet can be found on the front of the center console.

Waiting at our seats were the Giorgio Armani amenity kit, bottled water, noise-canceling headphones, pillow, and blanket. Upon settling in, we were approached by a flight attendant and were handed the wine and dining menus. She also offered us a pre-departure beverage. We opted for the lime and mint drink, which was served with a hot towel. Puneet also came by and offered us pajamas for the long flight ahead. 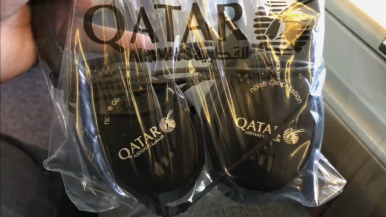 Soon boarding was complete, and the Captain went on the PA to announce the departure for our “ultra long haul”flight to Los Angeles. He clocked the flight time at about 16 hours for an on time arrival at LAX. We pushed back at the gate as the safety video started playing. We had about a 10 minute taxi to the runway, during which our pre-departure beverage glasses and towels were collected. Puneet also came by to greet us and thanked us for flying Qatar Airways. He recognized us from a previous flight and mentioned that he was happy to see us on board again. He explained that Qatar Airways offers dining on demand, in which we could order whatever we wanted at anytime. I thanked him, and asked that we would like to have our meal right after take off. He said, certainly! He then took our drink and meal orders.

Soon we were at the end of the runway and we were cleared for takeoff. We had a strong but smooth takeoff roll, and ascent. 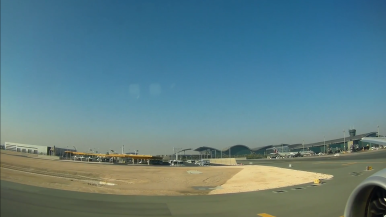 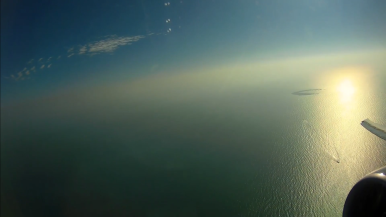 About 10 minutes into the flight, the Captain switched off the seatbelt sign, and the flight attendants started preparing for the meal service. Puneet soon came by to bring us our beverage. We ordered the mango and passion fruit smoothie, since this was an early morning flight. 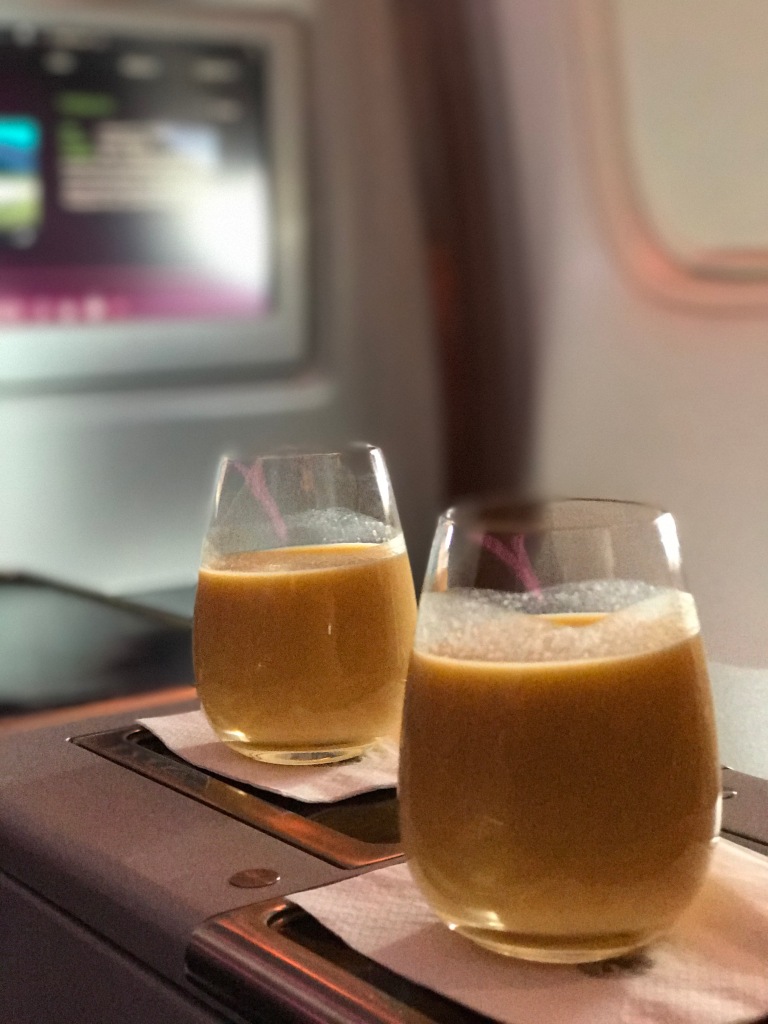 A few minutes later, our table was set complete with a bread basket, butter, and jam.

For starters, I ordered the Bircher Muësli which was delicious! Then, my main entrée was brought out. I opted for the steak and omelet. The omelet was very good, but the steak was a little on the tough side.

Then I asked for a cappuccino, which was served with a hot towel to end the meal.

After the meal, I visited the lavatory to freshen up, and change into my pajamas. The lavatory was a good size, and stocked with the usual Qatar Airways amenities. When I got back to my seat, I asked one of the flight attendants to help me slip the mattress pad onto the seat, which they happily helped me with. Then I converted the seat into a flat bed I tucked myself in. I slept for a good 5 hours. 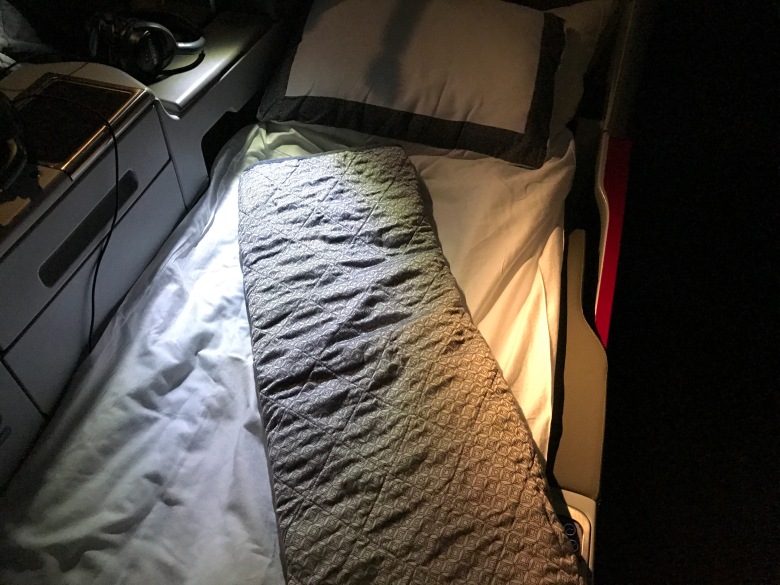 Halfway through the flight, I woke up and ordered a mid-flight snack. I got the chicken salad, which was light yet delicious! 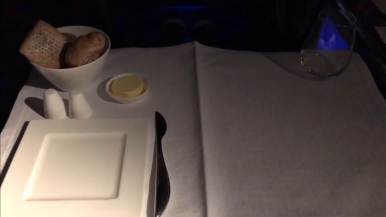 After the meal, I flipped through the IFE selection, and decided to watch a Filipino movie called “Dukot” (Abduction). I fell asleep again for a couple of hours, and woke up for the pre-landing meal service.

My table was again set, along with the usual bread basket.

For the appetizer, I ordered the clear spicy soup. It was the right temperature, and was very flavorful. 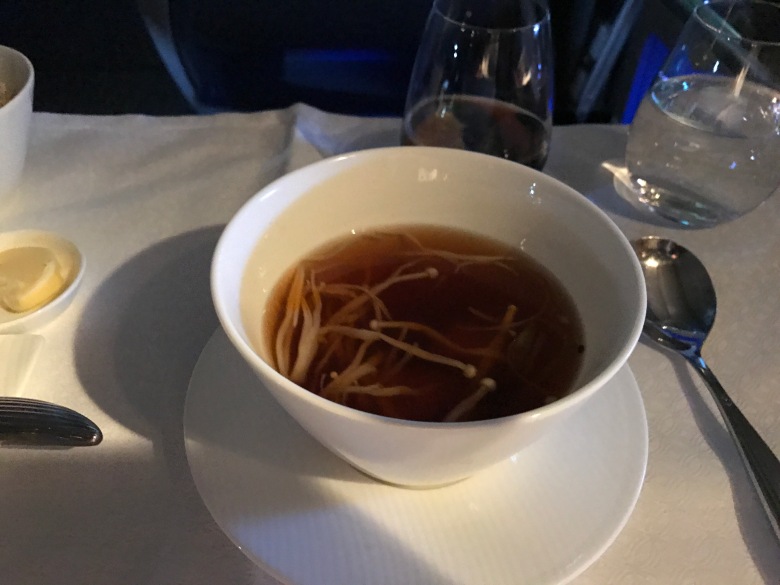 Then my main dish was soon brought out. I ordered the Beef Filet entrée which was very good and well presented.

I was already too full for dessert, so I just opted for another cup of cappuccino, which was followed by another hot towel service. 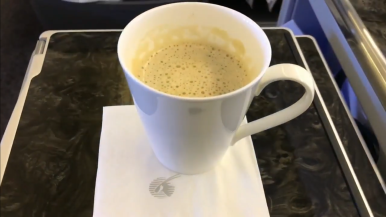 Soon the US immigration and customs video started playing, as the Captain announced our initial descent into Los Angeles. Puneet came by to collect any last service items, and thanked us for flying Qatar Airways. 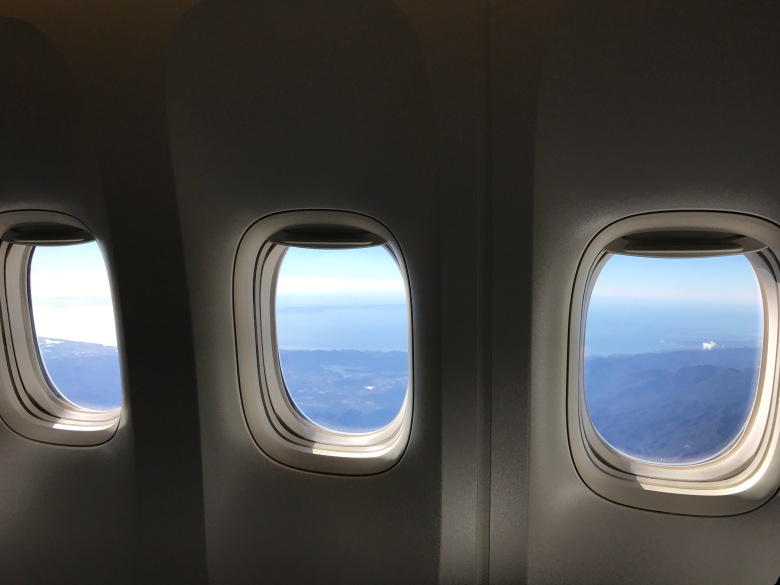 Our descent was gradual and landing was fairly smooth. Taxi to the gate took about 5 minutes, after which we said our goodbyes to the crew and disembarked.

Passport control and Customs were fast, thanks to Global Entry. We were back landside within a few minutes, and soon walked over to Delta’s Terminal 5 to catch our connection.

Qatar Airways is one of my favorite carriers, and for a variety of reasons. I really like their dining on demand option, which is normally only offered in First Class. I also love how consistent their service is. We’ve been flying with Qatar Airways a lot lately and we have received consistently good service on most, if not all our QR flights. Did I mention they offer Pajamas? Yes, they do on flights longer than 8 hours and on overnight flights less than 8 hours. The only drawback that I can think of is the older business class seats on Qatar’s 777 planes, which may or may not work for some people depending if they are traveling solo or with a companion. In our case, it worked out very well and it was a very comfortable 16 hour flight. I give this flight a very nice 8.5 out of 10.