After an amazing time in St. Marten, it was unfortunately time to head back home. As some of you may know, St. Maarten is home to the world famous Maho Beach where one can see airplanes planes take off and land up close (while sipping cocktail smoothies at the adjacent Sunset Bar), as the beach is literally at the end of SXM airport’s runway.  Maho Beach is one of my bucket list items, and I’m glad I was able to experience it first hand. 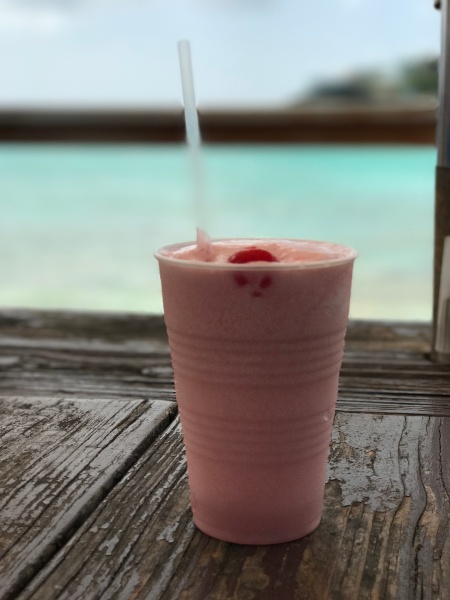 We stayed at the El Zafiro Boutique Hotel, which is about 10 minutes drive from the airport and is right next t to SXM’s runway. We loved how low key this property is. It is very private, and currently features only 4 suites with a shared patio. While there are more luxurious options in St. Maarten, this property is clean and well taken care of. The hotel is also beachfront, and we were literally steps from the white sands of Simpson Bay. More importantly, the property is only a 10-15 minute walk to Maho Beach alongside SXM’s runway. Their drinks are nice and strong, good food, and excellent service! 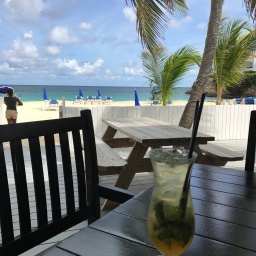 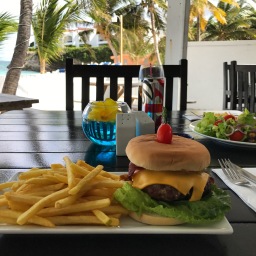 The day of our departure, we had breakfast and spent half the day at the beach as our flight didn’t leave until 4pm. We also had a nice lunch at hotel restaurant. About 2 hours before our flight, our ride picked us up and we arrived at the airport with plenty of time.

We used one of the self service kiosks in the terminal to print our boarding passes, then went straight to immigration and security. Immigration was a breeze and security was quick as they weren’t too busy at the time.

Once we were through, we made our way through the duty free shops to look for the Executive Lounge. Keep in mind that American does not provide lounge access to passengers in business class when flying to Canada, Mexico (except for Mexico City), Central America, and the Caribbean. Luckily, the Executive Lounge at SXM is also a Priority Pass lounge. Thanks to my Chase Sapphire Reserve card, I was able to access the lounge with my companion.

The lounge itself was very basic. There were plenty of seating, but their food options were very sad. All they offered was an empanada looking thing and some ham and cheese sandwiches. The lounge also had a bar area, where you order your drinks from. We spent may be 20 minutes in the lounge, and decided to just hang out at the boarding area. 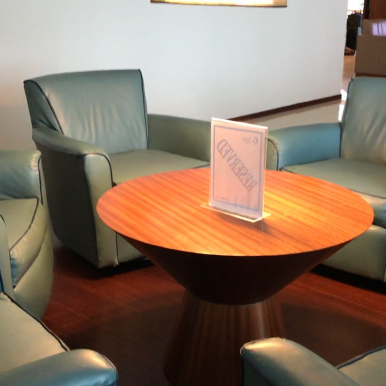 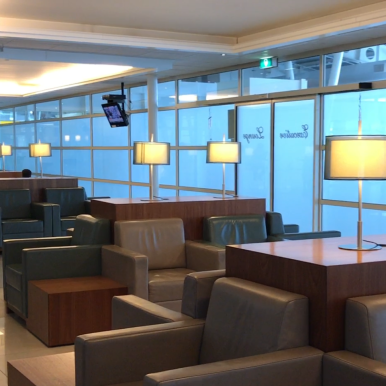 The boarding area had a nice sweeping view of the runway, and we got lucky, as it was around the same time the KLM Airbus A330 arrived from Amsterdam. Score! 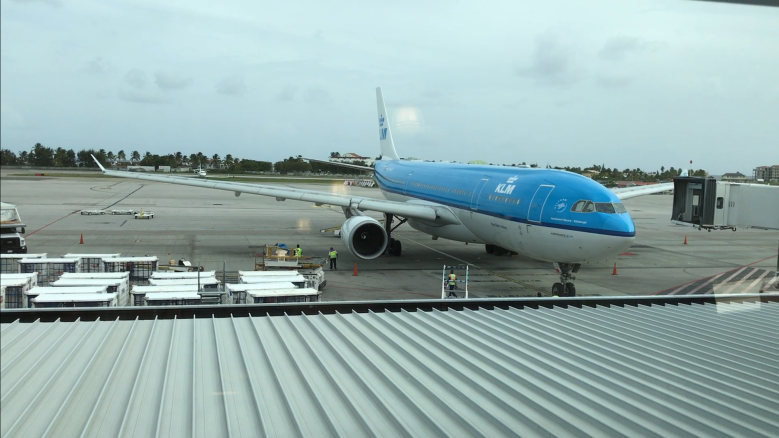 After 20 minutes, boarding for our flight commenced. Concierge Key members were called first, then Business Class passengers. At the plane door, we were greeted by Emmanuel, the purser. We then made our way to our seats. We were seated in seats 6D and 6F, in the last row of business class on the starboard side of the plane.

American’s Business Class (domestic First Class) on their Boeing 737-800 consists of 16 seats in a 2-2 configuration. The seats are pretty wide at 21″ and the center console also helps with the shoulder room. The leg room is decent at 40″ (compared to United’s paltry 37″). There are no leg or foot rests, but the seats do recline quite a bit. American recently refurbished the seats on some of their older 737 aircraft. Gone are the dark blue cloth seats. The First/Business Class seats have been reupholstered to a light gray leather.  I honestly think they made a good choice in color, as the cabin certain felt brighter as a result of the lighter colored seats. While these seats certainly aren’t the best, especially for long distance travel, they were more than comfortable enough for the 2.5 hour flight to Miami. 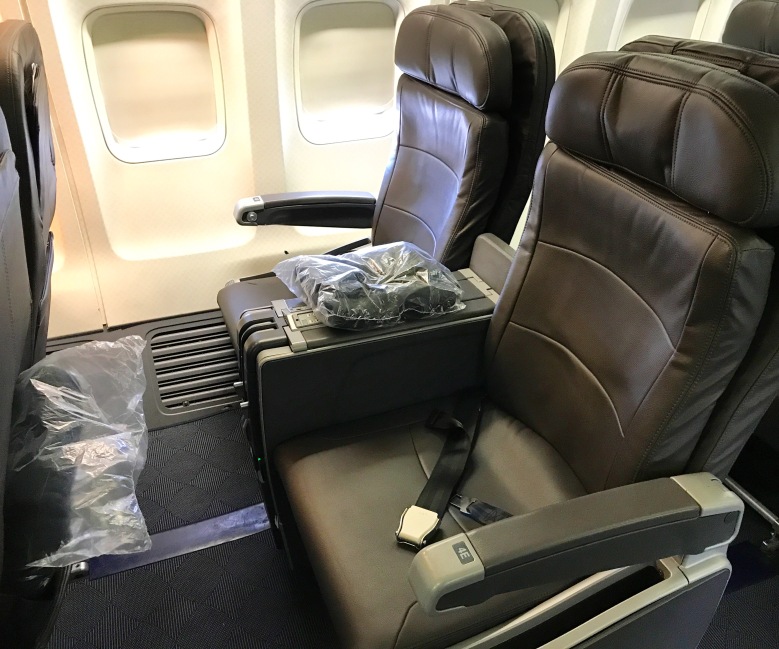 Upon settling in, the flight attendant working in front offered us a pre-departure beverage. My companion and I both ordered a diet coke, which was promptly served.

The flight wasn’t full, and only 8 out of the 16 seats in Business Class were taken. 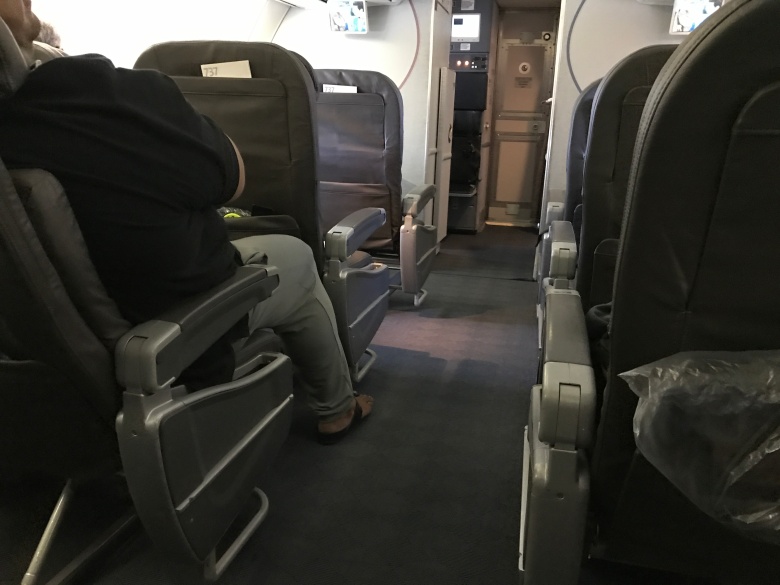 Soon enough boarding was complete. The captain made his pre-flight announcement, and mentioned our flight time of 2 hours and 30 minutes to Miami. We soon pushed back from the gate as the safety video played.

Taxi was a quick 5 minutes, during which the flight attendant, came by to confirm our pre-ordered meal. We soon approached the end of the runway and had a very powerful takeoff roll and steep initial climb. It was a clear day in St Maarten, which made for a nice view of the island below.

We hit a few chops on the way up, but it wasn’t too bad. The captain turned off the seat belt sign about 15 minutes after takeoff.

The in-flight service started with a hot towel.

Followed by the beverage service. I asked for another diet coke which was served with some warm nuts.

For the main entrée, I pre-ordered the beef filet with asparagus, roasted onion, and quinoa. It was served in one tray along with salad, bread plate, cutlery, and other accoutrements. Bread service soon followed, and I chose the pretzel roll. The salad was a little meh, but the beef  was delicious! It was a perfectly cooked, and tender.

For dessert, we were offered a warm cookie – yum!

After the meal service, I decided to visit the lavatory to freshen up. There is only one lavatory in Business Class, which is located in the front of the cabin, just before the cockpit door. The lav was small and there were no toiletries, but it was clean. 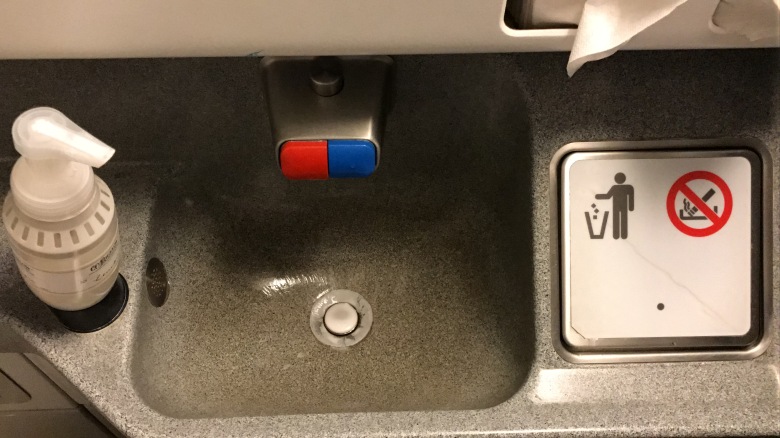 Sadly, there were also no individual IFE screens with AVOD (Audio/Video on Demand). Although there were overhead screens playing NBC shows. We were also given earbuds, so we could listen to the audio channel.

I took a quick nap and before I knew it, the captain announced our initial descent into Miami. The flight attendant came around with a tray of sweet mints, before starting their pre-landing preaprations. 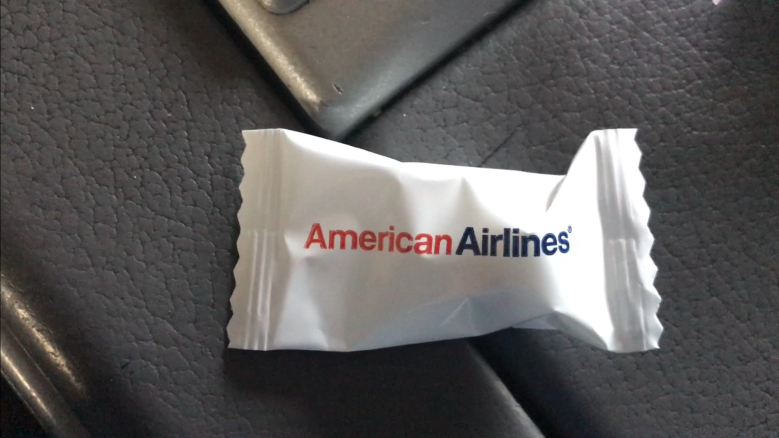 Our approach was smooth as it was a nice day in Miami, but oddly enough the landing was a little hard. We taxied for another 10 minutes, then parked at gate D51. We disembarked, and made our way to immigration and customs. There was a huge line at passport control, but thanks to Global Entry, we were through in a few minutes.

All in all a very pleasant short flight. The hard product was comfortable enough for the short flight, and the service we got was excellent. Definitely above average compared to my other flights on American. It may have been because there were only 8 passengers up front. The food wasn’t the best, but it was at least decent. The highlight of the meal was definitely the warm cookie at the end. Overall, I would give this flight an 8 out of 10.